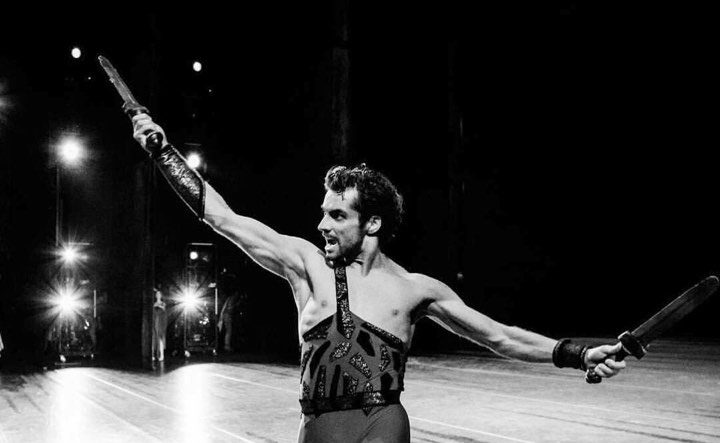 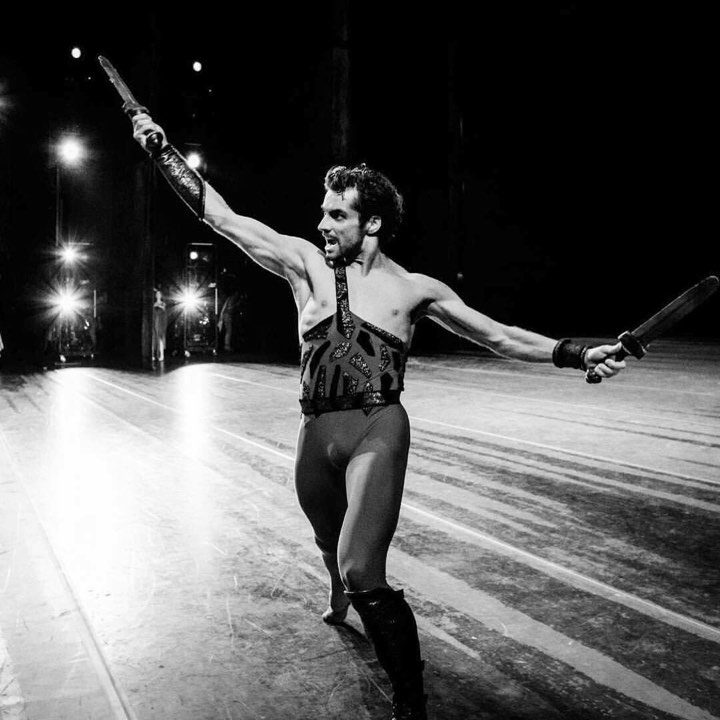 About Janet O’Keeffe.
It was Vakhtang Chabukiani’s performance in Flames of Paris in the film Stars of the Russian Balletthat first sparked Janet O’Keeffe’s interest in ballet.  But it was Fonteyn and Nureyev’s performances in Swan Lake, Romeo and Juliet, and Giselle that transformed her interest into a passion. In 1973, she saw her first live performance of the Bolshoi in New York and was thrilled by Raissa Struchkova’s energetic and passionate dancing in Walpurgis Nacht. A year later in London she saw Spartacus with Mikhail Lavrovsky, Vladimir Vasiliev, and Maris Liepa. It was these dancers and the tremendous energy and passion with which the company danced that made the Bolshoi unique among other companies.  It was Ludmilla Semenyaka’s artistry—especially as Aurora and Raymonda—that made her fall in love with classical ballet. In 1979, she saw the company for the first time at the Bolshoi Theater in Moscow and for many years after, she saw them on tour in the UK, Europe, and the US.  Among her most unforgettable experiences: having dinner with Chabukiani in Tbilisi; meeting Raissa Struchkova and watching her rehearse Nina Ananiashvili inRaymonda; and watching Maris Liepa coach dancers from the Moscow Classical Ballet in Spectre de la Rose.
This article is based on two interviews with Igor Tsvirko, a few days before and after his debut in the role of “Spartacus” on November 10, 2017.  Interpreter assistance was provided by Olga Ostrovskaya and Olga Smoak.

Like many young Bolshoi dancers, Igor Tsvirko was awed by the performances of Vladimir Vasiliev and Maris Liepa in the film of Yuri Grigorovich’s Spartacus. In 2007, at the age of 18, he wondered how it was possible to achieve such a level of artistry. “I could not even imagine myself attempting such a task.”

Yet, just 4 years later, then Artistic Director, Sergei Filin surprised him by asking if he would like to prepare the role of Spartacus. The answer: “I’m too young but I will try.” Thus began the dancer’s three months of preparation under his coach, Alexander Vetrov. Filin saw and approved his progress, but Grigorovich’s approval was also required and an opportunity to meet with him never materialized.

In the following three years, Igor began dancing many principal roles, including Ferkhad in Legend of Love, Solor in La Bayadere, Phillipe in Flames of Paris, Conrad in Le Corsaire, Abderakhman in Raymonda, Pechorin in Hero of our Time, and Petrucchio in Taming of the Shrew. When Makhar Vaziev became Artistic Director, he asked Igor whether he had danced Spartacus. When Igor responded in the negative, he said: “that’s odd; you must dance it;” and at the beginning of the current season he told Igor to prepare the part.

Igor’s response was mixed: happiness and excitement that he might finally dance Spartacus, but trepidation that the effort of preparing the role would once again come to naught. “It is very difficult,” he said, “to motivate yourself to push your body to the limit in rehearsals, not knowing if you will dance the role.” As it turned out, he did not know for sure that he would dance the role until just two weeks before the premiere.

When the date of his debut was announced, he was thrilled, but noted that “getting what you have wanted for such a long time does not bring unadulterated happiness. Now that my goal is about to be reached, I am feeling not just the everyday “nerves” before a performance, but tremendous pressure to deliver—to fulfill the expectations and confidence expressed in the decision to give me this role.” 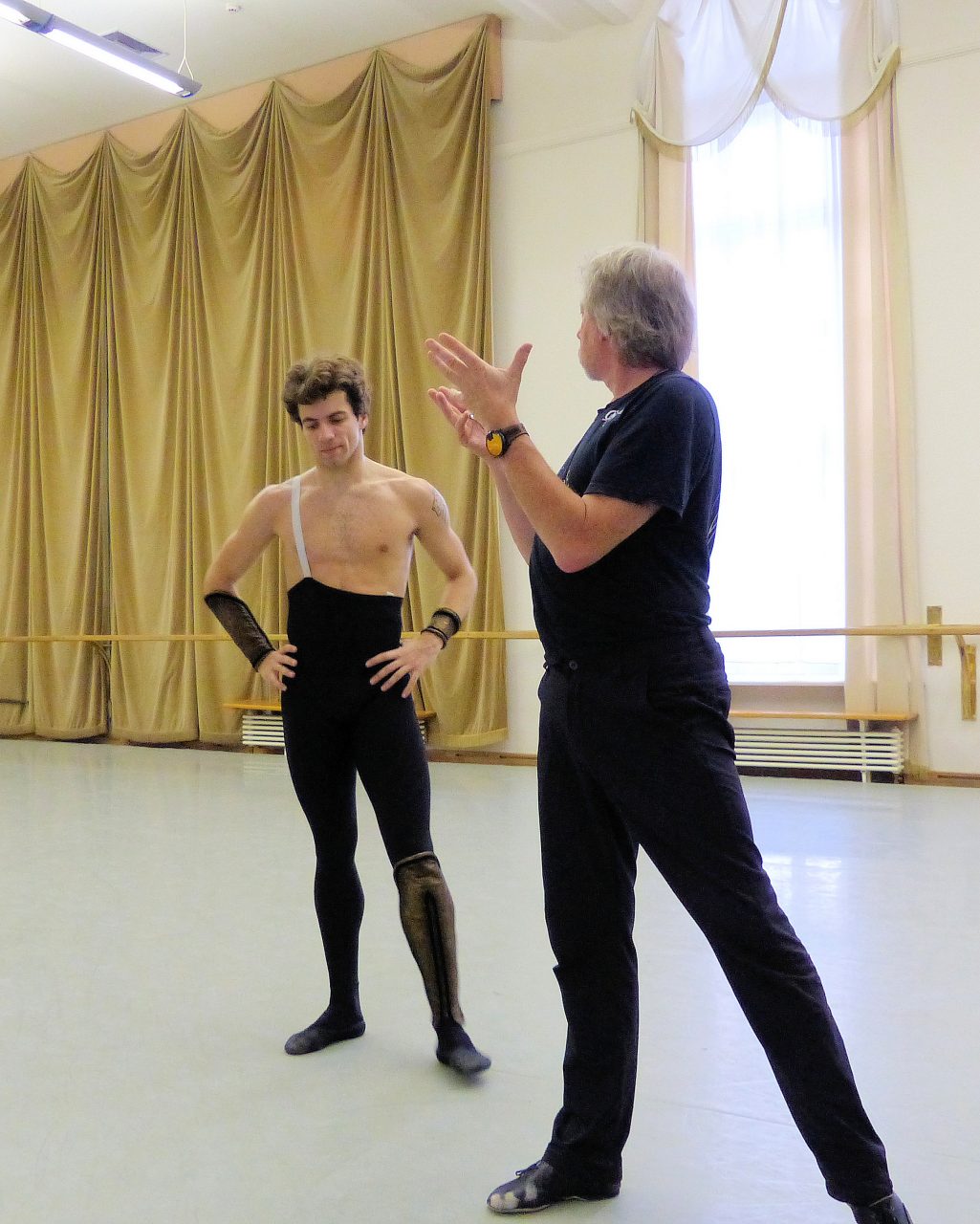 When asked how he prepared to dance such a demanding and iconic role, Igor responds that he was fortunate in having had excellent teachers and coaches; in school: Evgenia Petrova for acting; the legendary Evgenia Farmanyants; Tatiana Petrova who taught him folk dance; and Alexander Bondarenko and Nadezhda Vikhreva who taught him classical dance; in the theater: Alexander Vetrov and Alexander Petukhov.
Igor believes that his folk dance classes were particularly helpful in learning how to dance with emotional energy. “I always found it much more interesting to express emotion than to just dance well technically. I always searched for an emotional basis for movement.
I very much enjoy character roles because I have always admired how actors are able to portray different characters in situations they have not experienced. I see my profession as a chance to live a wide range of different lives.”

His initial preparation for the role of Spartacus six years ago included reading books about ancient Rome and slavery, but with just three weeks to prepare for his debut in the role on November 10th, he had to rely on the memory of his prior research. He recently watched the film Spartacus with Kirk Douglas and noted that while the filming was less dynamic than newer versions of Spartacus, the long close-up shots of the faces of the characters in the film were emotionally engaging, allowing him to see what they were feeling. Igor also noted that “the older film depicted the deep and complex psychological process that led to Spartacus’ decision to lead the slave rebellion.”

When asked how he was able to identify with the emotions of a slave, he became reflective. “I, like many people, have experienced situations where I had no control over events that affected me negatively, and felt great emotional pain, resentment, anger, and even rage. As an actor, I can draw on the memories of such emotions and use them as needed in a role. But, the acting needs to be nuanced. Gritting one’s teeth and clenching ones’ fists expresses anger overtly but crudely. I hope my expression of anger will be more subtle—perceived as a cold inner rage.”

The Cuban dancer Carlos Acosta once said that the role of Spartacus is a marathon that places extraordinary demands on a dancer’s body. Agreeing with this assessment, Igor notes that a major challenge in performing this role is to pace oneself while dancing full out so you will “get through all three acts without a stumble.” But he notes that many of the male roles in Grigorovich ballets require stamina. He considers Ferkhad in Legend of Love to be no less difficult than Spartacus. 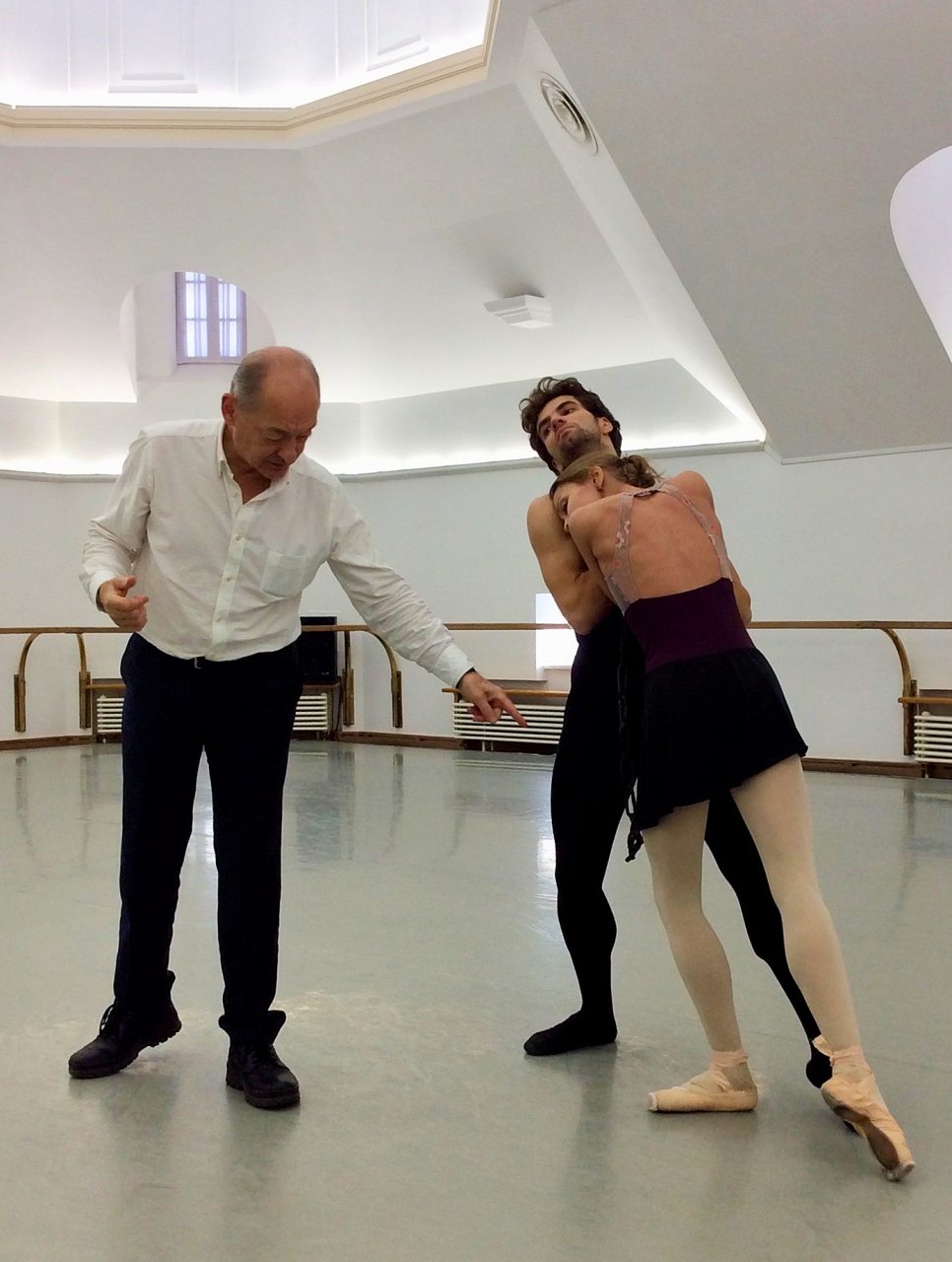 Earlier this year, Igor had worked with Mikhail Lavrovsky to portray the eponymous role in his ballet Cassanova. Igor and Lavrovsky—considered by many to be the most dramatic of the original interpreters of Spartacus—mutually agreed to work together to prepare the role, along with his coach, Alexander Vetrov.

Igor stresses the value of being coached—not just by someone who has danced the role—but by someone who learned the role directly from Grigorovich. He had only a short time with Lavrovsky—about 10 rehearsals—but in that time, Igor said, “he helped me to clarify the character’s emotional development through the three acts. He made me understand that each act presents a very specific but different emotional facet of Spartacus; and that the role requires internal transitions from act to act. In Act I, Spartacus experiences rage at being taken as a slave and separated from his wife, but in Act II, he begins to realize that he can free himself and decides to fight. In Act III, he transcends his ego and personifies the idea and the ideal of freedom.”

Even though Lavrovsky gave him very specific directions and demonstrations, Igor said “he kept telling me: this is how I did it, but you have to do it for yourself; you have to feel and express your emotions through the music.” Just before the performance, Lavrovsky visited Igor in his dressing room and said: “Forget everything I told you.”

Igor considers himself very fortunate in also having Alexander Vetrov coach him in the role, because Vetrov’s father, Nicolai Simachev, worked closely with Grigorovich for many years and coached his son in the role of Crassus. Of Vetrov, Igor says, “he understood precisely what I needed to portray the role of Spartacus.” 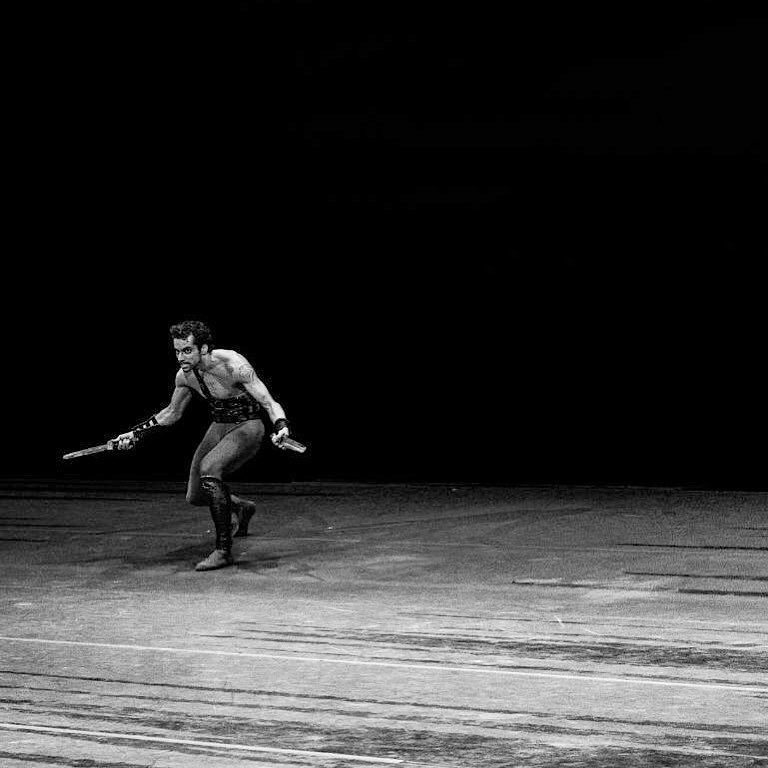 After the performance, Igor reflected on the experience. “The first act was the most difficult because in the first monologue I was trying too hard to communicate with the audience. Instead of experiencing the pain of finding myself a slave, I was trying to communicate the pain. I was trying so hard that I made a minor stumble, but fortunately, this made me realize that I simply had to become the character and in so doing, I would express what I was feeling, and the audience would see it without any additional effort on my part. After the gladiator fight, I felt the killing of my friend very profoundly.”

“The second act was better than the first because by then I knew I could draw whatever was needed out of myself. I was happy because I didn’t feel tired as I did during the orchestra/dress rehearsal. Because I felt better physically, I had more confidence that I would be able to deliver what the role required and to communicate effectively. I felt a strength I hadn’t felt before. I began to feel that I could get through all three acts.”

“In the third act, I was almost on a high because I knew I would get through it and was able to totally relax into the role—to connect with the spirit of Spartacus and project all my emotions.” 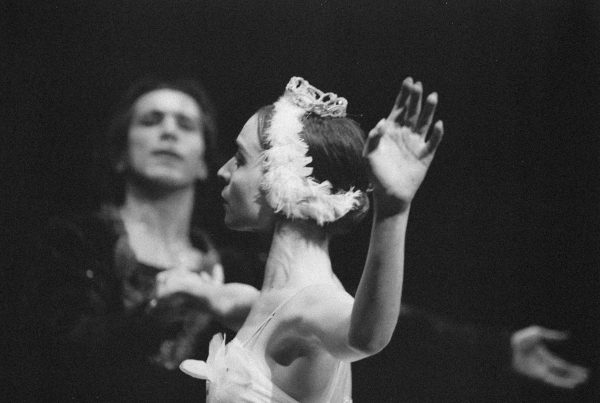